A new label out of New York is exploring the darker, moodier side of electronic music.Just-launched Samo Records will take you anywhere from electro to EBM to cold-wave territory and all points in between.

Founder Boris Knezevic (who DJs under the Facets moniker) wants to showcase the wealth of talent coming out of NYC, showcasing the best local up-and-coming and established artists on every release. Wanting to bring something different to the table, one of his key ideal behind the label is to connect people who wouldn’t normally be on the same release to create something new as a result of two worlds colliding.

Samo’s debut release comes from New York visual artist/musician Pixelife (Sean Dack), who has released on labels such as Throne of Blood, Let’s Play House, and Horn Wax and is also one half of Ghost Cop. The A side (“Omega Block”) is remixed by British producer Antoni Maiovvi, who co-runs the horror disco label Giallo Disco Records; the B side (“Chimeras in the Matrix”) remix comes from another British producer, Tronik Youth, who helms the prolific Nein Records.

The label is launching on August 11 at Good Room with Knezevic inviting The Horrorist and Pixelife to the party, as well as DJing himself. We asked Knezevic to share some of his ideas behind the label and talent he’s looking forward to working with ahead of the party.

GR – Samo Records is a very intriguing name for a record label, where does it come from?

Boris Knezevic – It took me a while to find the right name of the label, not sure if still is, however, it feels right. I was trying to have an English word for the label but that was impossible to find, as most are taken! I had to think outside the box and try to find a word in other languages I know. Once when I taking a nap in that semi-conscience state, I thought of word Samo. In Serbo-Croatian it means only or just. For some reason it struck a chord. I thought it was an easy word to say and pronounce in English, although in Serbo-Croatian its pronnounced SA-MO not SE-MO. Afterwards I remembered that Jean Michel Basquiat used Samo as his graffiti name, which made rethink the whole idea of even using it but in the end I went with my gut.

What do you want the label to stand for?

What I want to label to stand for is good music – could be any type music only that the output is quality. As the label was born in New York, Samo will feature local up-and-coming and established talent on every release as either original artist or remixer. The vision is to connect people who wouldn’t normally be on the same release and creating something exciting as a result of two worlds colliding.

Why did you pick Pixelife to do your first release?

I’ve always liked Sean’s (Pixelife) production and his other project Ghost Cop, (so) I always had in mind to possibly do something together along the way. He mentioned that he wanted to do a live analog set on The Lot Radio, so when I was given the chance to a show I invited him. Afterwards he told that most of the tracks he played were not taken so I asked him if would be interested in giving me some the tracks to use for the label I was starting. After working on them more I really liked the end result.

On the remix side we both agreed on the artist which to use. Luckily I had brought Antoni Maiovvi for a party in April and Sean was a fan so asked Antoni if we would like to do a remix which he accepted and did a great job. Tronik Youth did an incredible job too, I’ve been a huge fan of his label, Nein Records, and always liked what he produced, Sean felt the same way and the result speaks itself.

Can you drop some clues about release No.2?

Not gonna say much but going in the same musical direction. The original tracks are almost done so hopefully the second release will be out before the end of year.

You’ve picked an NYC legend to play at your launch party. Could you tell us a bit about The Horrorist and why you wanted him to represent Samo for your first party?

I’ve been fan of The Horrorist for some time now. He’s been making some great music for the last 20 years. We did the 2016 New Year’s Eve party together that I organized. He recently heard the first release which he really liked and mentioned that he would like to contribute in some way in the future so I when I was trying to think of the right line-up for the launch party I thought that he would be a great addition. Luckily he was not touring and he agreed to do it. Plus he never played Good Room nor has Pixelife so we’re in for a real treat! 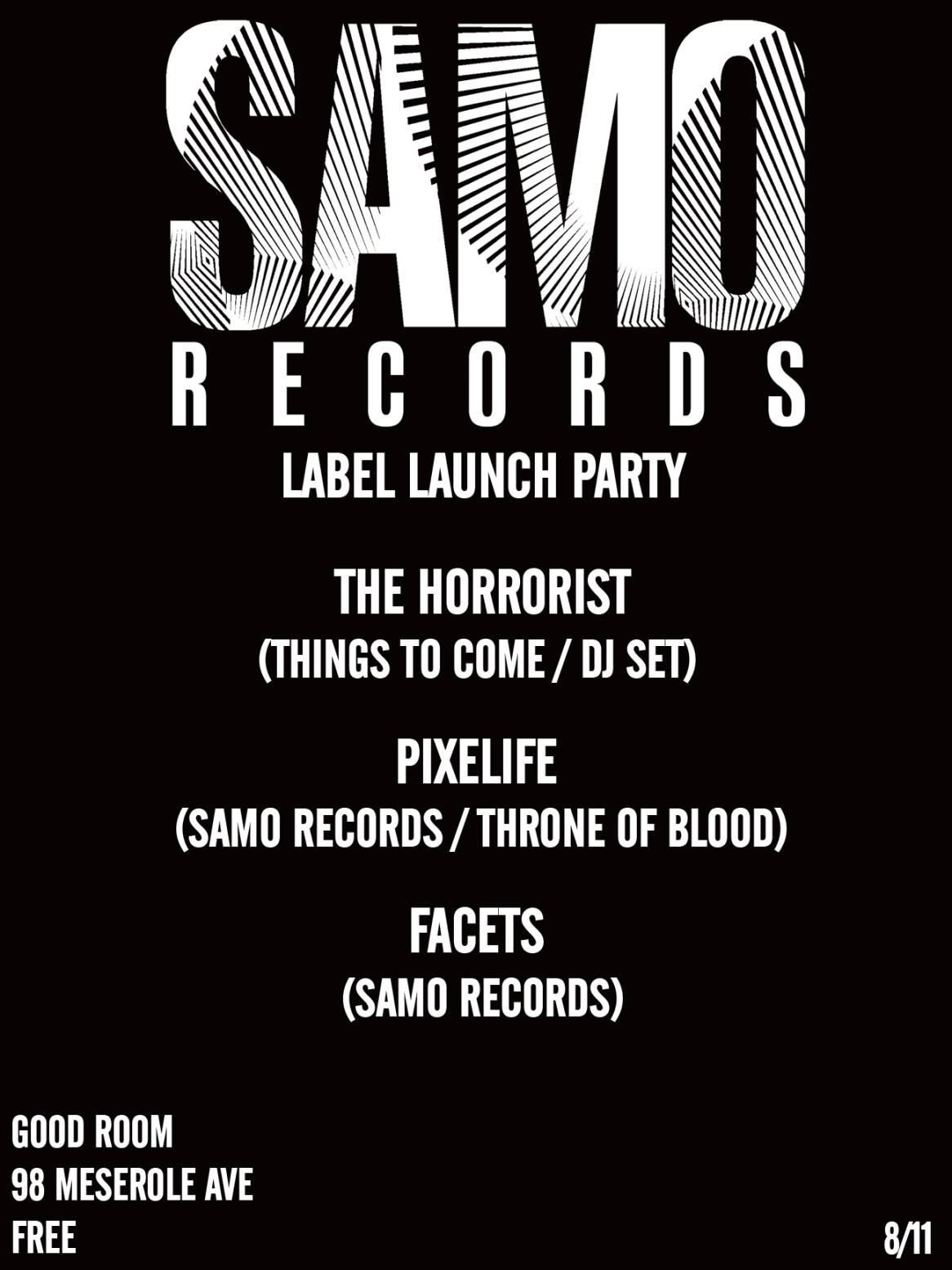